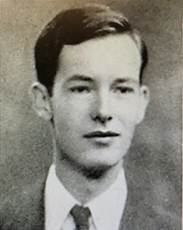 The University of North Carolina Chapel Hill Herbarium (NCU) has catalogued 17 vascular plant specimens and 8 fungal specimens collected by Paul W. Titman. As cataloging continues it is very likely that more specimens collected by him will be found. A frequent co-collector was fellow Tar Heel Ernest Gibbes Patton, who also went on to teach botany. All NCU’s fungi can be searched at mycoportal.org; our vascular plant specimens from the Southeastern United States can be searched at sernecportal.org.

Paul Wilson Titman’s parents were Paul Abram Titman, a depot agent for the Southern Railroad, and Mary Elsie Wilson Titman. He grew up in Lowell, Gaston County, North Carolina.1 In 1940 Titman was an undergraduate at the University of North Carolina at Chapel Hill and lived at 108 Hillsboro [Hillsborough] Street in Chapel Hill.2

I went to Chapel Hill and began to work in the atelier of the art department under the leadership of Russell Train Smith, the chairman of the department. One of the requirements was that one take a general botany course in the education spread. I was happy to do so because of my lifelong interest in plants… I still remember the first day of class, when a very distinguished, slim, elegant, white-haired, rosy-faced man, with a clipped white moustache came in and in a deep South Carolina accent introduced himself as William Chambers Coker. He also announced that this was the last time he was going to be teaching the introductory course. I soon found that his approach to life mirrored my own aspirations. To put it into terms of my present perspective, he regarded botany as an humanity, a manifestation in the middle of all kinds of thought processes… He [the art advisor] went to Boston and I went to Botany.6

Titman earned a B.A. from the University of North Carolina at Chapel Hill in 1941, then enlisted in the United States Army in October, 1942.   He served in Military Intelligence, and was awarded a Bronze Star for his service.3, 4

Paul W. Titman died on May 18, 2000 in Chicago. He is buried in Edgewood Cemetery in Lowell, North Carolina.4