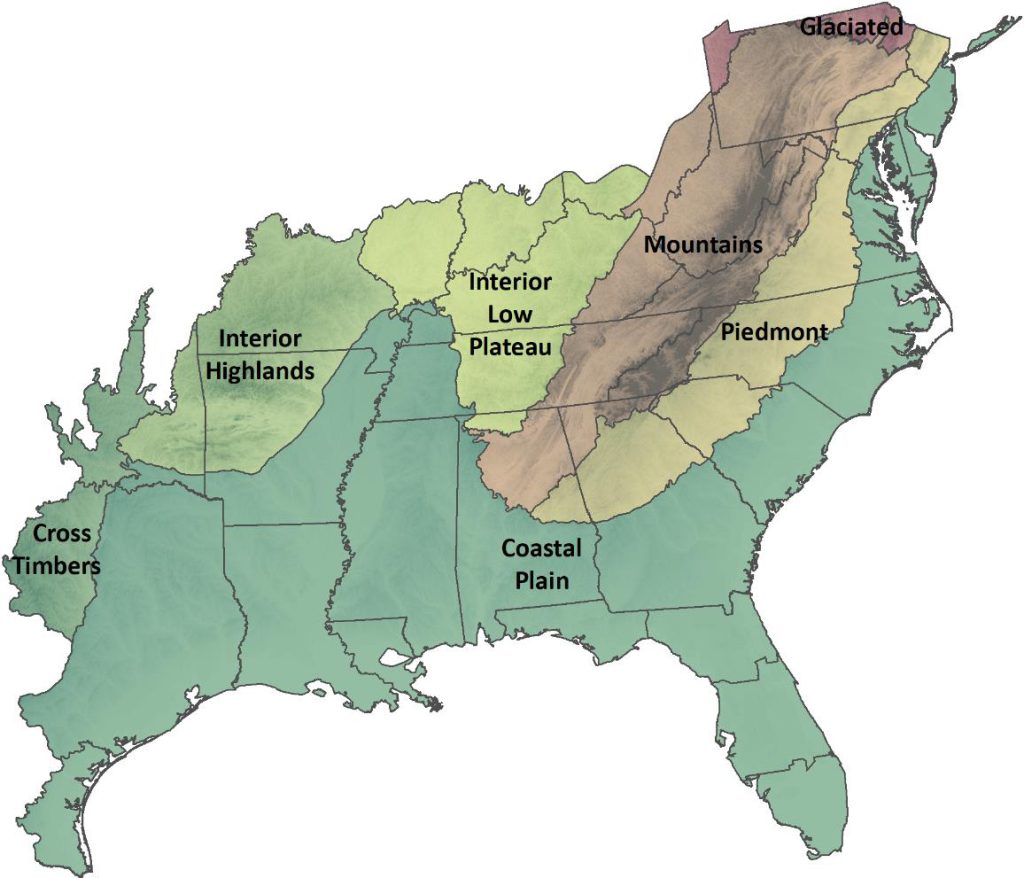 Geographic area covered by the 2022 edition of the Flora of the Southeastern U.S.

In April 2022, Alan Weakley, along with Michael Lee and the greater Southeastern Flora Team, released the 2022 edition of the Flora of the Southeastern United States (FSUS).

The Flora has expanded greatly since Alan Weakley, director of the UNC Herbarium, first began compiling information for a flora in 1992 (Fig. 1). By 2005, Weakley’s complete working draft of the Flora of the Carolinas, Virginia, and Georgia, encompassed descriptions and keys for 6,600 taxa. Since then, Weakley has released drafts of the Flora covering 7,000, 10,046, and 10,719 vascular plant taxa in the 2015, 2020, and 2022 drafts, respectively. The geographic extent of the FSUS has expanded substantially, covering the entire flora of 17 states with portions of eight other states (Fig. 2).

As taxonomic scientists and botanists continue to discover new species (Fig. 3) or new relationships among plant species, a flora must grow and adapt to accommodate our understanding of a region’s native and non-native plant diversity. In the 17 years that have passed since the first digital release in 2005, there has been a new flora release in 11 of those years, each better reflecting our understanding of the region’s plants. Since the last release in October 2020, the 2022 Flora of the Southeastern United States has been improved in several ways, including:

The Flora of the Southeastern United States benefits from its status as a flora database and not simply a static publication. Being a living, breathing document means new taxonomic revelations can be integrated into the database and reflected in each flora release.

Since its first digital inception and availability as an open-source document, thousands of both domestic and international users have downloaded the Flora, across private, state, and federal agencies and among a variety of naturalists and nature enthusiasts. It has been cited in its various drafts by hundreds of publications and still serves as the most inclusive, updated floristic resource for the entire southeastern United States.

Its utility and value as a modern floristic perspective on our diverse region would not have been possible without the contribution and organization of material from numerous modern botanists and scientists (Michael Lee, Bruce Sorrie, Derick Poindexter, Richard LeBlonde, among others), and without the valuable constructive feedback from its hundreds of users each year.

Whether you find yourself in a research lab, in an herbarium, in a field biology position, or just in your backyard, we appreciate your continued use of the Flora and continue to work diligently to provide you with the best possible resources available and enhance our conservation of our region’s vast plant diversity. See below to request the latest 2022 release, which, in addition to numerous other improvements, expands greatly on our technical botanical and ecological knowledge of the flora of the Southeast.

Request the 2022 Flora of the Southeastern U.S. here.