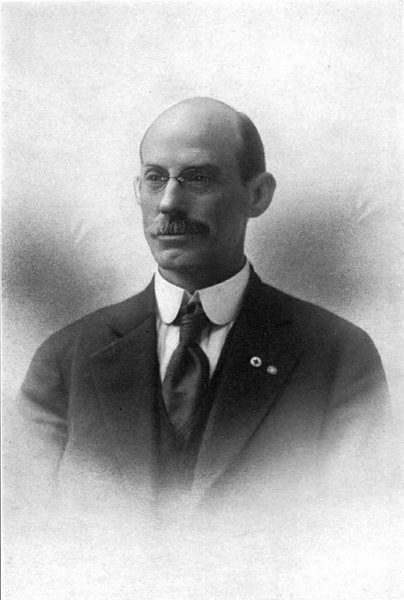 The University of North Carolina at Chapel Hill Herbarium (NCU) curates about a dozen fungal specimens collected by Ellsworth Bethel. It is likely that we will find more as we continue to catalog our collections.  Ellsworth Bethel’s specimens are distributed widely in herbaria across North America. He was interested in all aspects of natural history, so collected not only fungi, but also lichens, bryophytes, algae and vascular plants. According to mycologist Fred Seaver, Bethel was “an omnivorous collector.”1

Among non-scientists, Bethel’s most lasting contribution is the names of several peaks in the Rocky Mountains:

Ellsworth Bethel (1863-1925) was a Denver high school teacher who championed the cause of naming area peaks for Native American tribes. In 1914 he sketched a map of northern Colorado, complete with his recommendation for names of mountains at the time unnamed. He sent it to the U.S. Board on Geographic Names in Washington, D.C. His main goal was to represent 10 tribes connected with Colorado history by peaks visible from Denver. The board accepted some of his recommendations (such as the one for Mount Acoma) but rejected others. Bethel was angry and disappointed by the board’s decision to throw out some of his ideas, but they accepted enough of his suggestions that his influence still lives today in the mountains of the Indian Peaks Wilderness Area.
Foster, Lisa. 2005. Rocky Mountain National Park: The Complete Hiking Guide. Englewood, Colorado: Westcliffe Publishers. Page 315.

Ellsworth Bethel was born on 20 June, 1863 in Ohio. His father, William Smith Bethel, was a farmer. His mother was Phebe Ann Price Bethel, and his sister, Sarah, was two years his junior. Bethel attended Scio College (now University of Mount Union), though it is unclear for how long.13 Bethel was a Senior Student of Science at Grant Memorial University (now Tennessee Wesleyan University) in 1885-86.14   He was awarded an honorary Masters degree from the University of Denver in 1905.1

According to Fred Seaver, Bethel moved to Colorado in 1890 to teach high school (both the 1900 and 1910 Federal Census list Bethel’s occupation as “school teacher”).   In 1917 he joined the United States Department of Agriculture’s Forest Pathology laboratory and stayed in that job until his death in 1925.1

Although not exclusively a mycologist [Ellsworth Bethel] was sufficiently prominent in this field to deserve more than a passing mention. Born in Ohio, June 20, 1863, he migrated to Colorado in 1890, where he soon attained prominence as a teacher and in all-around naturalist. He was a graduate of Scio College and of East Tennessee Wesleyan University, and in 1905 he received an honorary degree of M.A. from the University of Denver.

My own personal acquaintance with Mr. Bethel is almost coextensive, in point of time, with my interest in mycology. From about 1904 until the day of his death (September 8, 1925) we were rather closely associated in things mycological and it is difficult to go far in the herbarium without encountering fungi collected in Colorado by Bethel.

When I first visited Colorado in 1910, Mr. Bethel’s company on a number of trips into the mountains was a great help and inspiration. Several days were spent together at Tolland; also in Geneva Creek Canyon and in the vicinity of Boulder.   On all of these occasions he seemed to have unlimited physical energy and boundless enthusiasm for the work. He was an omnivorous collector.

While the number of mycological titles accredited to him is surprisingly small, his collections have furnished groundwork for a number of articles contributed by other mycologists. In “The Myxomycetes of Colorado. II” Dr. W. C. Sturgis states: “Up to 1907 I had the invaluable assistance of Mr. Bethel, of Denver, and able and tireless collector, thoroughly acquainted with all parts of Colorado.” Of the 94 species of slime-moulds reported from Colorado in the first paper by Dr. Sturgis a very large percent represented the results of the field work of Mr. Bethel in this particular group. One species of slime-mould, Physarum bethelii (Macbr.) Lister, has been dedicated to him and a fine colored illustration published by Miss Lister, the English authority on the slime-moulds.

He was especially interested in plant rusts, beginning their collection shortly after going to Colorado, and here again contributed much field information for other workers as well as several articles on his own account. One species, Gymnosporangium betheli (Roestelia betheli Kern), has been dedicated to him by Dr. F. D. Kern now of the Pennsylvania State College. Also Aecidium betheli and Uromyces betheli by Dr. J. C. Arthur and Peridermium betheli by G. G. Hedgcock and W. H. Long, the latter species now regarded as a synonym of Cronartium comandrae.

And in other fields of mycology he showed similar interest. Many interesting specimens of discomycetes have been sent to us in the course of the years. One cup-fungus, Godronia betheli, named for him by the writer, was found to have an earlier name so must be relegated to synonymy.

In 1917 he began work for the United States Department of Agriculture in the office of Forest Pathology and was connected with this office until the time of his death. On October 3, 1924, he married Miss Dorothy S. Stokeley of Philadelphia.

He has been a subscriber to MYCOLOGIA and a loyal supporter of this periodical from its earliest inception. His loss will be keenly felt by mycologists.

ELLSWORTH BETHEL was born at Smyrna, Ohio in 1863. In 1890 he became instructor in biology in the Eastside High School, Denver, a position which he held until 1917. During this long period he enthusiastically studied plant and animal life of Colorado, paying special attention to those obscure and difficult groups, such as the fungi and slime molds, which had been little investigated in the West. Many hundreds of pupils passed through his hands, and to the great majority he was able to communicate a fair measure of his own interest in nature. Some eventually became competent investigators, and all spoke of him with affection and respect. As a collector, Bethel was extraordinarily active, by no means confining himself to those groups which he personally studied. He was continually calling attention to the facts and problems in such fields as entomology and conchology, in which he did not pretend to be an expert. The great accumulation of plants, especially fungi, in the State Museum at Denver, ran far ahead the possibility of critical study with the available resources. It was always Bethel’s hope that he would be able, in his later years, to thoroughly revise many of these materials. Unfortunately, the state of Colorado could not appreciate the importance of work on the native fauna and flora, and in the absence of financial support progress was difficult. Thus Bethel was led to take up work on economic mycology with the U.S. Department of Agriculture, and in this field has left a distinguished record.

Bethel’s scientific discoveries were numerous. In the Grand Canyon of the Colorado, close to the trail where hundreds of tourists pass every year, his keen eyes detected a peculiar snail, which proved entirely new to science, and was named after him by Professor Junius Henderson.* In California, one April day in 1923, Bethel picked a mariposa lily, and noted an unusual looking bee in the flower. It turned out to be a new genus, which received the name Betheliella. Among insects, those forming galls came in for special attention, and many new species were discovered. There are very few whose natural history interests are so wide, and fewer still who have the sort of intuition which leads them to collect unknown or little-known species in groups they do not personally study. In these respects Bethel combined the qualities of a naturalist of the old school with aptitudes more characteristic of modern times. He was a pioneer of the West, and although cut short in his prime, and variously handicapped during his life, he left a name which will not be forgotten.

Mr. Haven Metcalf, Bethel’s chief in Washington, sends me the following statement, with permission to quote:

In 1917 Bethel was appointed to the office of Forest Pathology as an associate pathologist, at the time we were in confusion over the question whether the white pine blister rust was or was not a native of America. A rust had been collected in Kansas many years ago, which was passing in the literature as blister rust. Suspicion pointed to the probability that this was a rust having its alternate stage on some pine other than a white pine, and Bethel was the only man to whom we could turn for help on this particularly complicated matter. His work played the dominant part in leading to the demonstrations at the Western rust was a new species, Cronartium occidentale, with its alternate stage on pinon pine, thus disposing of the fear that the white pine blister rust might be native. Upon this conclusion rests the value of the fall campaign against the white pine blister rust. Bethel’s knowledge of the rusts of the Rocky Mountain region, or indeed of the whole West, was prodigious. He was the best collector that I ever saw in action… He is profoundly missed by a large group of coworkers and correspondence. There is no one to take up his work.

Other botanists express themselves in similar terms, all emphasizing Bethel’s tremendous industry and enthusiasm, and readiness to assist others working in the same field. Ellsworth Bethel died suddenly at Denver, Colorado, September 8, 1925.

*In regards to the new species of snail discovered by Ellsworth Bethel, consider this information from Dr. Jeff Nekola of the Department of Biology, The University of New Mexico, Albuquerque: “The ‘species’ [Bethel’s] obituary was referring to is Sonorella betheli Henderson, 1914. This turns out to be a total [error]. From Pilsbry (1939): “Misled by a mistaken locality given by the collector [Ellsworth Bethel], Junius Henderson described rather small specimens (diameter 20.5 to 21.5 mm) as Sonorella betheli. In 1913 after visiting the Grand Canyon, where the thought that shell was picked up, the late Prof. Ellsworth Bethel spent some time in California. His chief interest was botanical. Probably these shells were taken near Los Angeles; the type in the University of Colorado Museum and a cotype, 109733 A.N.S.P., both of which I have seen, agree fully with [Helminthoglypta] traski from that vicinity.” Nekola adds, “H. traski is the common Helminthoglypta of the Santa Monica mountains, though it extends in to eastern and central parts of the Santa Ynez as well. There is also Oreohelix haydeni betheli Pilsbry & Cockerell, 1913. It’s from Glenwood Springs, Colorado along steep bluffs north of the Grand River.”11 So… in the end, Bethel gets a snail… but a different animal from that the one described in Cockerell’s obituary in Science.